Stick With It Sugar

I Don’t do Well with Limitations

Sunday’s prompt: Six Sentence Story. In this day of micro-blogging – brevity is a skill worth honing. Can you tell a story and make it short and sweet? What can you say in six sentences.

First let me ask do parenthesis count?
So those of you who have read any number of my posts you are already laughing at this prompt when it comes to me. Brevity is not my forte. I will give it a go though.

There are times in the last 5+ years that one or more of my littles has said something regarding diabetes that stops me in my tracks, makes me force a smile, and then leaves me hiding in my laundry room silently weeping.

One of those times was when Sugarboy was only 3 and getting ready to check his blood sugar, he took out his canister of strips and noticed it was the last strip in the canister, thus he said to me, “wouldn’t it be great if when you ran out of strips diabetes would be done.”

Later that same year we took part in the JDRF Walk to Cure Diabetes – just before we began the walk Sugarboy asked if we got the cure at the end of the walk or would they mail it to us.

Another time just before his fifth birthday Sugarboy said he would be happy when diabetes went away after his birthday; seems he thought that D was something kids had until they turned 5 since his brother didn’t have D when he was 5.

Sweetstuff viewed the sex-ed video at school when she was in forth grade, when she returned home I asked her if she understood everything, she said yes it was fine but then asked, “will my kids have diabetes?”

This last one isn’t a tear jerker – it is actually funny and I wanted to end on a happy note – btw this sentence doesn’t count. 😛

We were at a friends house and Sugarboy was playing with their big fluffy dog, I told him that Buttons has diabetes too, he looked under Buttons belly and moved his hands through her fur then asked, “Where is her infusion set?” 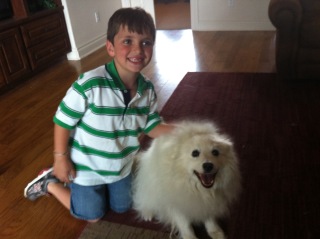 Babblings about life with diabetes as experienced from a moms point of view. I’m not a doctor, nurse, or diabetes educator. Please do not change your diabetes management based on any information found within this blog without first seeking assistance from your doctor.