Stick With It Sugar

So today’s assignment was to go to http://www.flickr.com/explore and write an ekphrasis post about a random image.
Sounds fun except I ran out of ‘word a day’ toilet paper before ever learning ekphrasis. Thus I had to look it up.
According to Wikipedia:  the graphic, often dramatic, description of a visual work of art.
However I don’t always trust Wikipedia since from my understanding anyone can write definitions for the site. I happen to know a few jesters that would find it quite hilarious to write inaccurate definitions for said site so I check out the Merriam Webster site as well. As per Webster: Ekphrasis means a literary description of or commentary on a visual work of art. That makes more sense to me than Wiki’s definition. So know that I’ve expanded my vocabulary I can continue with my Ekphrasis post.

This was my random image: It is called Fly me to the moon by Trek 22 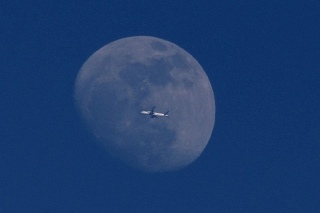 I struggled at first with this. I wanted to play by the rules – random image – apply to health cause.
Thus my first thought was about how high airplanes fly and thus about all the various highs my my kids and I have battled over the last 5 years. Also how afraid of flying I am  – well afraid of crashing. Same thing with the sugar highs – its not just the complications it is also the crashes that can result from coming down too quickly.

I stared a bit longer at the image and thought a bit deeper. I thought about how in the early 60’s we (the US) pledged to put a man on the moon. The idea of traveling to an celestial body over 200,000 miles away seemed impossible. There were so many unknowns, so many variables and many obstacles. Yet it was done – One small step and all… So as I think of the enormity of space travel and the difficulties that were overcome I feel hope. Hope that in my children’s lifetimes there will be a cure for diabetes, despite unknowns, variables and obstacles (not mentioning any names – FDA).

While contemplating how this image speaks to me a melody kept playing in my head and soon the lyrics followed. There is a pop song that is played nearly every 10 minutes on radio stations across the nation. See Partial Lyrics below:

Chorus:
Can we pretend that airplanes
In the night sky
Are like shooting stars?
I could really use a wish right now
Wish right now
Wish right nowYeah, I could use a dream or a genie or a wish
To go back to a place much simpler than this‘Cause after all the partyin’ and smashin’ and crashin’
And all the glitz and the glam and the fashion
And all the pandemonium and all the madness
There comes a time where you fade to the blackness
And when you starin’ at that phone in your lap
And you hopin’ but them people never call you back
But that’s just how the story unfolds
You get another hand soon after you fold
And when your plans unravel in the sand
What would you wish for if you had one chance?
So airplane, airplane, sorry I’m late
I’m on my way so don’t close that gate
If I don’t make that then I’ll switch my flight
And I’ll be right back at it by the end of the night

I only included the chorus and the first verse. While I like nearly all music some of the rap stuff doesn’t agree with my head but the many of the lyrics speak to me – sometimes I really could use a wish.

Ok so now that I followed the rules and used my random image let me share the images that I found that also spoke to me. Since I could spend days exploring all the wonderful photos I decided to limit my explorations to Feb 7, 2007 (The day Sugar Boy was dxd) and April 19, 2009 (the day Sweetstuff was dxd) – still a little random right. 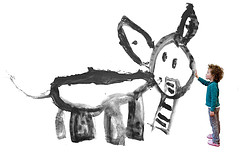 So I could not believe this picture was uploaded on Feb 7th, 2007 the same day the elephant moved into our home. The elephant that is always lives in our home and no matter how often we would like to ignore it (not ignore the medical necessities but the idea that it will change us) – it bullies its way into every aspect of our lives. There are many times that we win and the elephant is relegated to some far off corner – those are good days and thankfully there are more good than bad. But Diabetes has changed our family. My kids are not as carefree as their peers and they have had to grow up a bit faster than their peers. In the end it is made my kids stronger, smarter, and braver. Diabetes has made me stronger, smarter and braver too. 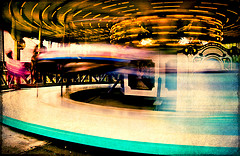 This is how I felt the morning of April 19th, 2009 when my Sweetness checked her blood sugar (not yet diagnosed) and we saw a 254 present itself so quietly on the screen of SugarBoy’s spare meter. My head spun, my stomach dropped and my eyes swelled with tears yet I knew I needed to stay strong since the eyes of my 9 year old first born only daughter were watching me – waiting for my reaction. I searched for words – do I say “I’m sorry”? Do I tell her it is likely a mistake (although I had known for hours it wasn’t)? Do I cus like she had? (Yes she took a liberty with a cus word that fine Sunday morning her words – “Shit, I’m diabetic”) What did I say through the spinning world that I felt was falling around me – I said “Ok pack a bag, remember socks”. She did remember socks btw -fuzzy pink ones with polka dots.

Life is a balancing act. I try my best, sometimes I fail, sometimes I win, sometimes it is a draw. I hope while I play my roles my kiddos see me learn from my mistakes (proof that I am trying) and celebrate my wins.

2 thoughts on “Airplanes Elephants and Merri-Go-Rounds”

Babblings about life with diabetes as experienced from a moms point of view. I’m not a doctor, nurse, or diabetes educator. Please do not change your diabetes management based on any information found within this blog without first seeking assistance from your doctor.